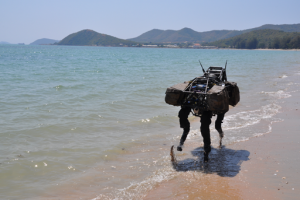 US based tech company Boston Dynamics were acquired by Google at the back-end of 2013, the details of which have not been made public. What also has not been seen fit for public consumption by the software giant is their reasons for showing such an interest in military robot technology, although Google have vehemently denied their intention to become any kind of stand-alone military contractor.

Boston Dynamics create and provide computer intelligence and advanced robotic platforms, as well as more traditional simulation systems. They were created in 1992 by Professor Marc Raibert with the express focus being on making robotic systems that move with dynamic motion.

Speculation about the reasoning behind the sudden interest in this sector of technology has been rife, however the director of engineering at Google Ray Kurzweil has publicly exclaimed his interest in blurring the line between artificial and organic intelligence.

Kurzweil has predicted that within 35 years, human civilisation will be so far removed from what we see now, that the very idea of making ones bed in the morning, or ironing a shirt will seem as prehistoric as making fire with two sticks.

There is no doubt that computers are getting faster and more intelligent, but could they ever get to a point where their intelligence allows them to think and behave like a human? Kurzweil certainly thinks so. It is his influence, along with executive Andy Rubin that has led to the purchase of the company responsible for the ‘Atlas Humanoid’, ‘Big Dog’ and latest creation ‘Sand Flea’ which is capable of jumping 30 feet in the air.

Boston Dynamics are one of, if not the most advanced robotics companies out there, they have been a long-term supplier of robots to the US military and they represent the 8th robotics acquisition by Google in just 6 months.

Of all the robotics companies that Google have taken, Boston Dynamics are perhaps at the forefront in terms of technology. Their self-balancing creations are something to behold, as exemplified by the YouTube video of ‘Big Dog’ managing to stay on its feet when traversing ice, mud, and even when being kicked by a mean looking member of the military.

They have also created the Cheetah which runs faster than Usain Bolt, Atlas which is a humanoid able to climb up trees and walls using hands and feet, and RHex which is a small six legged insect of a robot which is used for all kinds of terrain.

Although initially Google’s accumulation of high-end tech companies is not specifically commercially based, there are plans for products within 5 years. Exactly what to expect is being kept under wraps, but with plans apparently having been in place for the last 10 years, the roll-out is sure to be captivating.

Google initiated their first public robotic project back in 2009, releasing robotic cars with roof-mounted cameras which enable them to navigate roads by mapping them out in 3D. It currently has a fleet of 10 cars all of which have travelled thousands of miles free of incident.